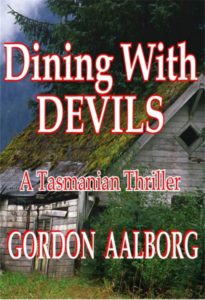 2nd in the “Specialist” series of Tasmanian thrillers.

On a remote Tasmanian grazing property, a gundog judge is murdered, at first glance by a blind man shooting blanks at a dead pigeon in an incident seen but not understood by Tasmania Police Sgt. Charlie Banes and his close friend, visiting Canadian author Teague Kendall.

Meanwhile, Kendall’s almost-lover Kirsten Knelsen, an ardent caving enthusiast, is kidnapped elsewhere in Tasmania, with nothing to even suggest the two incidents might be related. Then Kendall himself goes missing.

It takes all of Charlie’s “country cop” skills to discover the links, which involve Kendall’s vengeful Tasmanian ex-wife, a psychotic, American-hating ex-Viet Nam sniper, and a killer believed to have been dead for more than a year!

Charlie’s rush to save his friends and end the killing spree is a race against time through the eucalypt forests of Tasmania’s east-coast highlands. Aided by a cranky old bushman and his even-crankier Jack Russell terrier, Charlie also has help from the ubiquitous Tasmanian Devils … world-class scavengers with their own ideas about appropriate table manners.

Critical Acclaim for DINING WITH DEVILS

“Gordon Aalborg has given us the benefit of his intelligent imagination. Tight as a drum construction. Characters you care about and fear. Set in Tasmania! Who but Aalborg with his enviable sense of humor could have pulled this off? DINING WITH DEVILS is a must read.”

“A masterful spine-tingler of a suspense… Gordon Aalborg’s latest installment of his Tasmania-set tale of murder and cannibalism is a cunningly plotted treat, with an ending that will leave readers hungry for more. Be prepared to read DINING WITH DEVILS in a single sitting, because this is one novel you won’t want to put down—not even for dinner.”

“The imagination of this author is something to behold and his off-beat and sometimes macabre humor adds a rich if mordant texture to the novel, something to be savored, as one would a fine meal or a top quality French wine.”