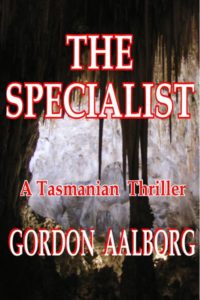 1st in the “Specialist” series of Tasmanian thrillers.

The Specialist is a serial killer with very specific and unique tastes. He especially likes the flavor of innocent female bicycle tourists.

Kirsten is a jewellery designer whose hobby is caving, and she carries a lot of emotional baggage, above-ground or in the bowels of the earth.

Her sister Emma goes missing en route to visit Kirsten, then her sister’s Kirsten-designed ring mysteriously turns up in a newly discovered cave on Vancouver Island. This cannot be and should not be, but Kirsten knows it to be true because she found the ring herself!

Now she has to solve the riddle of an apparent impossibility, with the help of a few old friends and one deliciously tempting new one.

The specialist wants her to join him for dinner.

Brief Excerpt of The Specialist

…If he got those hands on her, she stood no chance. But in the cave, here in her own element…

He’s good, and he moves too damned well to suit me, but he’s no caver. And he doesn’t know this cave; I do.

She had time, if not much of it, so Kirsten thrust her mind out, trying to visualize the cave system as she knew it, searching for places she would have the advantage. Crawls, tight spots, any place that would grant her speed while slowing down her much larger pursuer. She remembered Sid mentioning one totally circular passage…that would allow her to get behind him, to make a dash for the exit, give her a chance to try and haul Kendall out of the well so they could both run. Except…she’d never seen that section of cave, wouldn’t recognize it, couldn’t negotiate it from description alone. She had to stay with passages she knew, had to get ahead, stay ahead, but…

The other exit. He doesn’t know about that!

Her spirits sang, until she remembered the tightness of the crawl to get there, the devil’s club with its fierce, unrelenting spines. But at least it was a chance, and a good one…if she was lucky, if she was fast enough, tricky enough!

Then she heard the voice…that beautifully-modulated, rich, chocolate-fudge voice, amplified by the underground, the more beautiful for that…and all the more frightening, too.

“This is silly, Kirsten. You have nowhere to go and you know it. I have only to sit and guard the entrance; you’ll have to come out sooner or later.”

She didn’t answer, kept her attention on the tiny flicker of light, knowing it wasn’t as far back in the passage as it looked, knowing she would have to move, soon, and move quickly. Knowing, too, that once the doctor got close enough, he had only to follow her own light, and if he could maintain her speed it would be impossible to lose him. She would have to pause, look back, if she wanted to know where he was, how close he was. He would be advantaged by not having to pause in his pursuit.

Her light! He was already too close…she couldn’t duck into any of the side passages here because he’d see, he’d know. He’d see her light. And she couldn’t move without light…

“Good writing, powerful suspense, a unique setting and characters you care about put THE SPECIALISTin the top rank of current thrillers.”